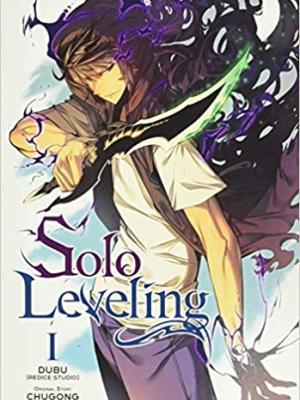 Solo Leveling I by Chugong

Known as the the Weakest Hunter of All Mankind, E-rank hunter Jinwoo Sung's contribution to raids amounts to trying not to get killed.

Jinwoo is known by all Hunters as an 'easy-run'; anytime he's on a mission is an almost assumed easy dungeon raid. That was completely true, until Jinwoo's last raid; where a regular dungeon turned into a double-dungeon with an S+ tier monster lurked, murdering all of Jinwoo's hunting party. That was his last memory until waking up in a hospital with news that he's the lone survivor...

With his second chance of life, Jinwoo learns that he's become more than just the E-Rank Hunter he was; pushing himself to learn his new limits and what his new powers hold.

Based off of a Korean webcomic/Manhwa (Only I Level Up [Solo Leveling also found on TappyToon]), where I first heard about it, we've gotten a manga release (and hopefully an anime adaptation claims Crunchyroll).
If you enjoy the 'I died and now I'm super powerful' trope, then this title is right up your alley. Jinwoo isn't a bad protagonist and we come to understand why he has to push himself so hard for his family, and to better himself.
I will continue to not only root for Jinwoo, but also recommend this to anyone looking for an action/adventure/fantasy manga!