Magus of the Library by Mitsu Izumi 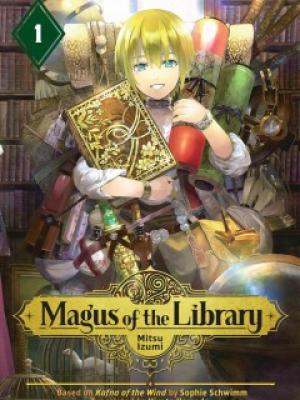 A book for book lovers! Theo Fumis loves books, but because he lives in the slums, the town librarian refuses to let him borrow books or even set foot inside the library. That doesn't stop him from sneaking in to read them though! Due to his mixed ancestry, easily apparent by his pointed ears and blonde hair, Theo is shunned by nearly all of the town's residence, and books are his only escape from his harsh life. A life he dreams of leaving behind by becoming a kafna.

Kafna are specially trained librarians who live and work in Aftzaak, The Central Library - also known as the City of Books. It is said to hold all the books in the world. It is the first library, established after the wars, and all others across the continent are offshoots. Though Aftzaak is a long way off, and the kafna exam is not only difficult but expensive to take for someone like Theo, who has so little money, his dreams might be closer than he thinks. For a group of kafna are coming to do an inspection of the town library, and they are not pleased with the rumors they've been hearing.

A strong start to a fantastic series! I finished volume five recently, and volume six cannot be released soon enough! First of all, the art is absolutely stunning. The impressive level of detail put into each page brings the world to life, and helps the reader to see the subtle difference in dress and environments across the continent, giving the world added depth. On that note, the setting is very unique. There is predominately a middle eastern design to the clothing and towns/cities, but each of the races has a distinct style of dress, as well as unique mannerisms and traditions. Again, this very much helps the world to feel diverse and detailed. Additionally, as more of the world's history is revealed, as well as hints to the current political climate in the nations, the plot expands from that of the story of an outcast boy to a more epic hero's journey with world-altering potential. Throughout, Theo is a very likable character. He grows to be strong, but is still often very sensitive. He's fascinated by the cultures of the continent's various races, but is very respectful and polite when interacting with those from backgrounds different than his own. At his core, he is a simple and straightforward person, with an honest heart and an inquisitive, thoughtful mind.

The last thing I want to say about Magus of the Library is, as a librarian, I can tell Mitsu Izumi did her research. The story touches on many behind the scenes areas of librarianship, such as book repair, library policies, and reader's rights. It was great fun seeing someone incorporate those elements so well into a story of high fantasy. If you enjoy reading character driven stories with magic, friendship, and, of course, lots and lots of books, I'd recommend giving this one a try.

Check out more books for book lovers on our list!