Fall of a Kingdom by Hilari Bell 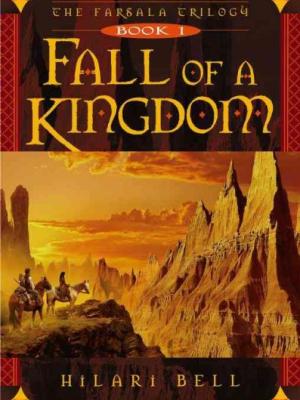 The first book in the magical and action-filled Farsala trilogy.

Farsala is a kingdom of wealth and prosperity - for the ruling classes, anyway. The common people and the desert tribes are seen as lesser citizens by the nobility, who have felt secure in their power and superiority for hundreds of years. When the Hrum march on Farsala's borders, the nobles are certain of victory against the invading empire. The rest of the citizens are less confident. The Hrum have been steadily expanding their empire; when they conquer a nation, everyone who formerly held power is sold into slavery and the citizens are conscripted into the Hrum army. No one has been able to stop them, and some think a shift in power might be worth the cost.

However, there is a ray of hope for the divided country. Any nation that can withstand the Hrum army for one year is allowed to become an allied kingdom instead of a subjugated one. While they don't know it yet, Jiaan, Soraya, and Kavi - a bastard, a lord's daughter, and a poor commoner - each have a part to play in Farsala's future. If they're to have any chance of setting things right, they'll need all of the courage, cunning, and determination they can muster - along with a little help from the fabled Sorahb, the legendary hero prophesied to return in Farsala's hour of need.

I love this series. I first read it in college and it is one of those stories that has stuck with me since. I love the world Hilari Bell created, with its rich culture and unique magic system. I love the characters; how distinct they are from each other, and how none of them are perfect. All of them have shining moments, but they also mess up and make poor choices, which makes them feel more like real people. I also really like the no-win scenario our heroes have to face. There's no beating the Hrum. You either are forced to join them without any rights, or asked nicely after proving you can be useful. It makes for a unique plot as the citizens of Farsala try to stand their ground, a strategy made even more difficult by the fact that not all of them want to! Like many real feudal societies in history, the majority of the nobles have been abusing their power, and plenty of the common people feel being sold into slavery would just be putting the shoe on the other foot. All of this makes it difficult for our three heroes to find common ground, but the changes brought by the invasion help them to see the whole picture and what things make Farsala worth fighting to keep.

If you like adventure, magic, and character-driven stories, I would highly recommend you pick up Fall of a Kingdom.