Daughter of the Moon Goddess by Sue Lynn Tan 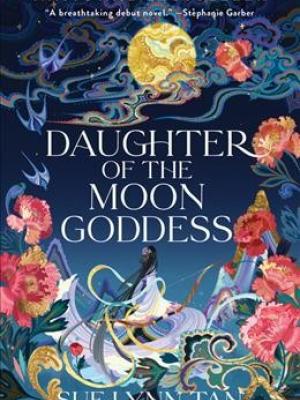 To say Xingyin has lived a sheltered life is putting it mildly. She, her mother, and her mother's attendant live alone in the Palace of Pure Light on the moon, for Xingyin's mother is the moon goddess. Their days pass peacefully, until Xingyin awakens her celestial powers, which prompts an unexpected visit from the Celestial Empress. Xingyin learns that her birth was a secret, and that her mother's position as the moon goddess is a punishment for drinking the elixir of immortality, which the Celestial Emperor gifted to Xingyin's father for saving the mortal realm from the sunbirds. The moon is a prison, and her mother can never leave.

To escape discovery, Xingyin flees the moon. Barely escaping pursuit, she finds herself in the Celestial Kingdom and, after being hired as an attendant for a spoiled noblewoman, befriends the realm's prince. The encounter prompts her to enter a competition to study alongside him in magic and martial arts. As Xingyin grows in strength and confidence, so too does her friendship with the prince blossom into something more. However, there are dangerous forces at work in the kingdom, demanding sacrifices of them both. Torn between love and duty - for she has never forgotten her vow to set her mother free - Xingyin must be brave, strong, and very, very clever if she is to have any hope of coming through the storm alive.

I love fairytales and mythology, so it is not surprising that Daughter of the Moon Goddess appealed to me as soon as I saw the title. I am also only passingly familiar with Chinese mythology, so it was fun and exiting to see Sue Lynn Tan incorporate stories and magics which were new to me. The setting was very creative, and the descriptions, especially of nature, were gorgeous. The characters are also easy to like, Xingyin especially, and you can feel the weight of their struggles. Even the villains, for all of their wrongdoings, are sympathetic characters. It's easy to see how they went down the paths they did. That's part of what - in my opinion - makes Xingyin such a well written heroine. She can see how simple it would be to cross that line, and works to maintain her honor and her integrity even during the darkest moments.

Daughter of the Moon Goddess is part epic fantasy, part love story, and part coming of age tale. The first chapter is a little slow because of all the set-up, but once Xingyin leaves the moon, the pace quickly picks up. It has a strong lead, a beautiful world to discover, and a plot that, once it takes off, keeps things interesting until the final page.