The Women in Black by Madeleine St. John 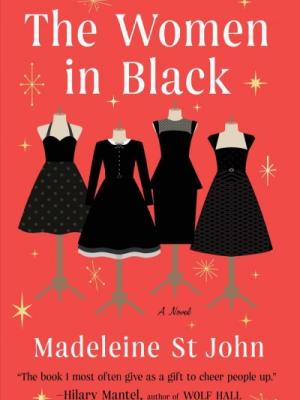 Described by the New York Times as “a love letter to old-fashioned department stores,” and by author Hillary Mantel as “the book I most often give as a gift to cheer people up,” The Women in Black (2020) by Madeleine St. John explores the lives of five women who work in the Ladies’ Frocks department of a fictional high-end retail establishment, F.G. Goode, during the 1950s. Specifically, this slender and witty novel unfolds over the course of six weeks in 1959, during which the central characters, uniformed in standard issue black dresses, are preparing themselves for, and enduring, the holiday shopping rush.

As is typical, the season is a hectic one, but for Patty, Fay, and Magda, a recent post-war refugee from Eastern Europe, and also Lisa, a young, temporary assistant called Lesley by her parents, and the mysterious Miss Jacobs, personal pursuits and private conflicts add an extra layer of intensity and complication.

The Women in Black is a character-driven story that gradually builds into a sly and entertaining satire of the values and manners of Australian society during this era. The plot swiftly and gently addresses the repression of women (and, by extension, men), old school family dynamics, and the immigrant experience. While this may make Madeleine St. John’s novel sound like a weighty reading experience indeed, in fact, it is a nuanced “feel good” book, “up lift” fiction laced with meaningful themes.