TJ Powar Has Something to Prove by Jesmeen Kaur Deo 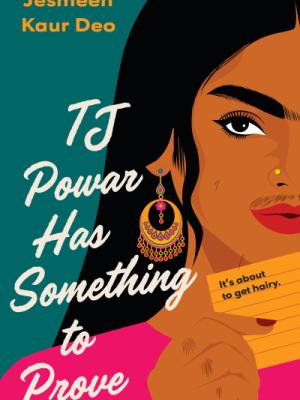 TJ knows the struggles of body hair, she waxes, she tweezes, she does everything she can to maintain her body hair from growing on her face, her arms, her legs, bikini area and underarms. Early on, she found herself heavily bullied for her body hair by other girls and peers in middle school. Ever since then, she has never wanted to feel unbeautiful or unworthy again. But when her cousin, who doesn’t shave or wax, was photographed and viciously turned into a meme. TJ couldn’t take it anymore, so she took a stand. TJ wants so badly to believe that body hair doesn’t make you ugly, she wants to believe she is beautiful despite her body hair. To prove her point she stops trying to remove it and let all her body hair grow.

I found this book to be very body positive as it maintained an open, honest discussion about body insecurities. Body hair on women is often turned into a controversial topic because of the beauty standards that our society holds for women. Often, we see how those beauty standards can negatively impact young girls and younger women. Like the main character TJ, who has to think constantly about body hair removal routines to be able to move around in her life. Body insecurities about body hair are rarely discussed and this book does a phenomenal job at encapsulating the shame and fear that comes from having body hair as a girl or woman. Not only does the main character, TJ, have to confront her own bias to find herself beautiful with body hair, but she also faces the criticism of her boyfriend who wants her to shave, her best friends who don’t understand why she would want to be hairy, her family members who want to help her tweeze and her peers who don’t understand her struggle.  TJ is a strong protagonist and throughout the entire book we can feel ourselves rooting for her and empathizing with her struggles.