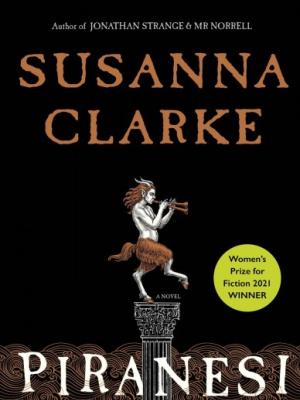 Susanna Clarke, author of Jonathan Strange & Mr. Norrell, describes her latest genre-busting novel, Piranesi (2020), as a story about a house that contains an ocean. True, yes, but as Clarke well knows, Piranesi is much more than her deceptively simple synopsis.

The House is the book's primary setting, a strange parallel realm to a recognizable, contemporary England. In its lowest level, the House contains an ocean, surging with dangerous tides. Its highest holds an atmosphere, dotted with birds. The stony, cavernous middle level contains mammoth and intriguing statues, open for interpretation, and also a mysterious, solitary castaway named Piranesi.

Piranesi has managed to survive an impossible situation, stranded with minimal resources in a desolate environment as he is, sustained by his wits, wisdom, and methodical approach to mapping and understanding the world that contains him, which he has come to see as “infinite” and “kind,” and from which, it seems initially, there is no escape. But when another character makes an appearance in the middle level, a man called “the Other,” who has come to fear and disdain the House, as much as Piranesi has come to love and cherish it, we understand the House has limits that are permeable.

It becomes clear that the Other is using Piranesi as a kind of tool, or, to put it more bluntly, a slave, to gain information about the House. But why? And why is Piranesi so compliant to the Other’s wishes? What is the House, exactly—a trap or a refuge? These questions are among the many that arise in this unusual novel, which at times feels like a fantasy, at other times a mystery or thriller.

Piranesi is a rich and meaningful read, one which demanded my entire focus. I was delighted to give it, as I found myself deeply moved by the Piranesi’s complicated and evolving character, distressed by the machinations of the Other, intrigued when new characters enter the House and challenge the status quo, eager to solve the mystery and see who’s left standing at the end.