One Of Us Is Lying by Karen McManus 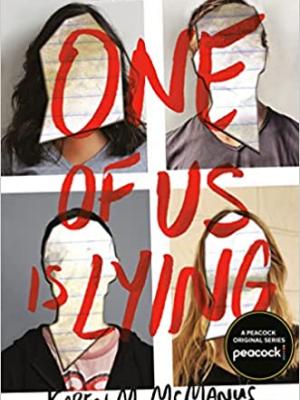 One Of Us Is Lying by Karen McManus

When the creator of a high school gossip app mysteriously dies in front of four high-profile students, all four become suspects. It's up to them to solve the case.

If you were in the same room as the person running a notorious gossip site, who may or may not have ruined your life or the lives of your friends, and no one but other 'victims' were around, would you take revenge? Would you say anything if you saw one of the others do something?

Following four major suspects in the 'murder' case of Simon, Bayview's gossip-mongering outcast, Bronwyn, Addy, Nate, and Cooper have been tossed to the wolves with Simon's final gossip posts. Not only are they isolated due to being murder suspects, but what few friends they have remaining dwindle thanks to being outed by Simon's post. Their worlds deteriorating as some of their biggest secrets are spilled for everyone to read, but who can they rely on if not themselves?

I had been completely intending to have gotten into the 'One Of Us Is Lying' series, and I'm glad I waited a bit to do it as there's a rumored third book to the series set to release in 2023 'One Of Us Is Back'. (One Of Us Is Lying and One Of Us Is Next)
If you're on the lookout for a fan-favorite thriller, with slight romance, I highly suggest giving this book a chance.