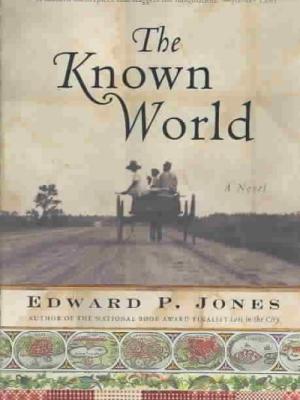 Antebellum Virginia is the setting of this eloquently written historical novel by Edward P. Jones, winner of the Pulitzer Prize in 2004 and the National Book Critics Award in 2003. The Known World opens as Henry Townsend, a former slave who now owns a large and fertile estate and is master to many slaves himself, lays dying. From there, the story moves back and forth through time, as an omniscient narrator chronicles Townsend’s life, the lives of his family members, and the lives of people he encountered in the larger community.

Some readers, myself included, may find the structure and style of this narrative make for a more challenging reading experience, especially as the first pages unfold. I adapted by taking it slowly and savoring every word. As a result, I found myself entirely immersed in stirring, albeit unfamiliar situations, captivated by intriguing and complexly drawn characters, and contemplating questions and issues of injustice and oppression, desire and desperation, in new ways. The Known World, based on the little known fact that a number of once-enslaved people did go on to become slave owners themselves, expanded my awareness of past, present, and possible future implications of racism and classism, even as it swept me up in its saga and left me deeply moved.