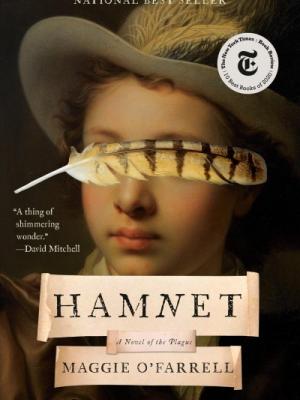 Thanks to WPL’s Fiction Book Group, I was able to read Maggie O’Farrell's most recent novel, Hamnet (2020), for a second time. I found the story fascinating and intensely moving the first go-around, but the second was the charm for me, as I was better able to savor O’Farrell’s beautiful and illuminating writing style, rich with details of an Elizabethan England rarely portrayed in novels or on the screen—the world of common people, not the court.

Set in bucolic Stratford, where farmers and sheep herders, glove makers and guild members live in community, maintaining complex and meaningful relationships despite the hardships of the time, Hamnet revolves around the family of William Shakespeare. Referred to as “the Latin tutor,” “the husband,” or “the father," the great bard otherwise goes unnamed, remaining, by and large, more absent than present on the page. Instead, O’Farrell focuses on “the husband’s” wife, Agnes, as well as their three children, Susannah, Judith, and Hamnet. The narrative pivots between two timelines, one revolving around “the Latin tutor’s” unlikely courtship of Agnes, many years his senior, the other around Agnes and her children, ages 11 to 13, and the tragic impact of the Plague on their lives. O’Farrell’s work with characterization, that of Agnes, in particular, took my breath away, and the impact of the Plague, specifically, on a family, and generally, on the larger world, resonated as eerily timely. How much has changed, Hamnet leaves me wondering, when it comes love and loss, the grief that can accompany both? Apparently, not so much.