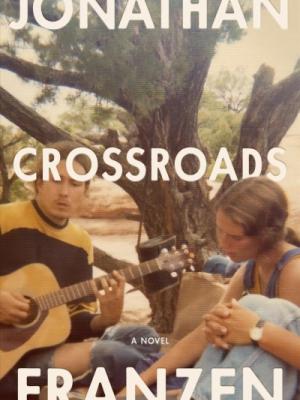 Crossroads (2021) is the first novel I’ve read by Jonathan Franzen, an author who made a big splash when his first novel, The Corrections, was released, just over twenty years ago now. Franzen has gone on to write other popular novels (with single word titles), including Freedom and Purity, along with multiple essay collections. Like Franzen's other novels, Crossroads is a BIG book, clocking in at 580 pages. A family saga, and the first of a trilogy, it explores the identities and conflicts of a father, a mother, and their four very different children.

I was initially drawn to Crossroads when I learned that it was set in a suburb of Chicago—one perhaps not so different from Wheaton. The novel also concerns church dynamics, particularly related to tensions in church leadership. Russ Hildebrandt, the father of the book's central family, is a pastor experiencing a moral crisis that plays out on several levels: his role as a husband and his relationship to his kids, as well as his increasing insecurities about his own abilities to function as a church leader. Russ leads a complicated, at times clandestine, life, and Marion, his wife, and their children have their own closely held secrets. Franzen doesn’t shy away from issues related to mental health and addiction here, nor, as this book is set in the early 1970s, does he avoid the fraught political and social concerns that came to a head as the Vietnam War began to wind down. In fact, Franzen digs right into these concerns, with members of the family sometimes seeming to stand in for aspects of our society as a whole.

At times, I found Crossroads to be an uneven novel, perhaps overly long, as some reviewers state. The ending comes too abruptly, at least for me. But I was intrigued by the fraught workings of the Hildebrandt family, as well as the questions the book raises about faith, the church as an institution, and social commitments and codes. I already know that when the second installation of this trilogy releases, I’ll jump at the chance to read it and find out what happens next.