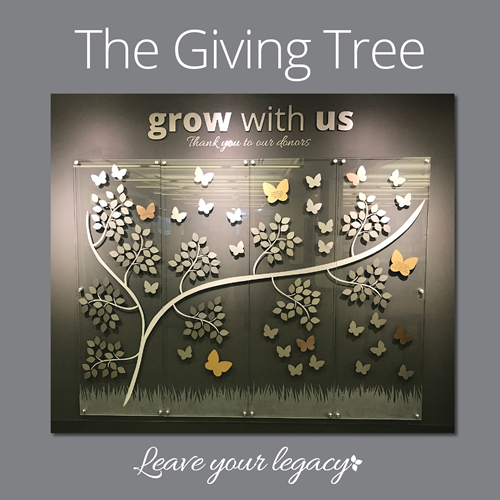 In winter of 2019, Wheaton Public Library established a Giving Tree for individuals to make contributions into a permanent fund for the Library that will grow and help meet its needs today and into the future.

This beautiful, permanent art installation features the names of individuals, organizations, and businesses who have donated $500 or more to the library. Inclusion is cumulative, so donors may advance from one category to another over the years as they continue to donate.

All donations made to the Library’s endowment fund are tax-deductible. The Library, through its partnership with DuPage Foundation, can also help facilitate gifts of retirement assets, marketable and closely-held securities and other appreciated property.

The Wheaton Public Library has established an endowment fund in partnership with the DuPage Foundation, a Downers Grove-based 501(c)(3) public charity.

To learn more about the Giving Tree or how you can donate, call the library's Business Office at 630-868-7590 or email foundation@wheatonlibrary.org

Thank you for your generosity!

All donations made to the Library’s endowment fund are tax-deductible.

While Andrew Carnegie is best known as the creator and owner of Carnegie Steel, and, as a result, being one of the richest Americans in history, he was also a noted philanthropist. Carnegie gave away over $350 million, almost 90 percent of his fortune. Public libraries were some of the largest recipients of his generosity. Over 2,500 libraries throughout the world have been built with money donated by Andrew Carnegie. Illinois was home to 106 Carnegie libraries, and while many buildings no longer serve as libraries, the legacy left by Andrew Carnegie’s generosity will always be remembered by the library community.

John Quincy Adams (a relative of the 6th U.S. president) built the first library in Wheaton in memory of his late wife Marilla Phipps Adams. Built in 1891, the library was one of the first in DuPage County and also one of the first to use the Dewey Decimal System. The original library housed 3,000 books, all of which were purchased and cataloged with funds donated by Mr. Adams. The Adams Memorial Library was used until 1965, when the growing population of Wheaton made a new, bigger building necessary. The Adams Memorial Library is now the home of the DuPage County Historical Museum.

Katharine Adams Wells was the daughter of John Quincy Adams, and played a vital role in the development of the library we know today. She assisted with cataloging the original collection and became the first librarian of the Adams Memorial Library, which opened in 1891. In 1932, Katharine Adams Wells oversaw the conversion of the great hall into a children’s room. Wells also willed Adams Park to the community of Wheaton upon her death in 1942.